Corin has flown out to Nepal for ten weeks, during that time he will be finalising arrangements for, and delivering, a five-day workshop for 25 teachers from the Yolmo Valley in using computers and IT.

This is supported by the Helambu Rural Municipality (HRM) and the syllabus for the workshops has been set by the Binod Lama, the IT officer for HRM.  Nepali trainers will run the workshops based in two computer labs, one of which will be stocked by the loan of laptops from Norbuling Secondary school, many thanks to Lakpa Sherpa. The other using laptops which are already in Melamchi Ghyang Secondary School.

Whilst in Nepal Corin will be updating the Schools Administration System, currently in use at Melamchi Ghyang and Norbuling schools, gathering feedback and supporting the schools in its implementation.

Corin visited Nepal for nearly three months in the spring of 2019 to organise training in the use of IT and computers, for teachers and head teachers of schools in the district around Melamchi Ghyang.
The training was delivered in early April at Melamchi Ghyang School. 40 teachers attended over eight days of training.  Split into four groups of teachers including: beginners, novice and experienced headteachers and computer studies teachers.
Training was delivered by Nepali IT specialist trainers, including Binod Lama, Bhimlal Bhandari, Nisan Rai and Jyoti Khadka.  Corin reports, "They were brilliant and have done very well."
Whilst in Nepal Corin has developed the management software package (Schools Integrated Information System) and a handful of headteachers trialled the system.
Photos from the computer room, taken by Corin during February 2017, showing students and teachers using donated laptops:
Grade 9 doing their End of Year Practical Exam
​Grade 8 learning program design and Visual Basic
Teachers being trained 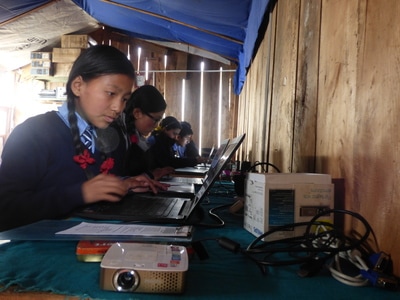 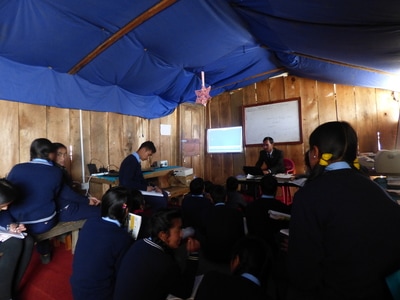 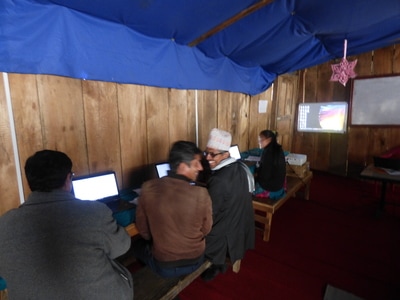 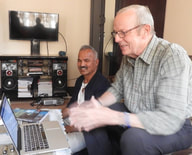 Having been unable to visit in the spring of 2018, due to an achilles tendon operation, Corin flew out early in November 2018 to Nepal visiting Kathmandu, Kiul and Melamchi Ghyang. The task was to plan for more computer training in the district of Helambu in Spring 2019.  Headteacher, Purna Gautam was, as always, very supportive. He organised a meeting with the chair of the Helambu Rural Municipality who suggested I contact the IT officer for the Helambu district.  At a meeting at Kiul, en-route to Melamchi Ghyang, we reviewed the material and made some revisions and received the official ‘go ahead’ for the training.
We are pleased that the training plan is being shaped by local headteachers to meet local needs and in the Spring 2019 we plan to deliver the training.
​
Group A – Training headteachers (IT illiterate)
Group B – One teacher from each of the 34 Helambu schools
Group C – Further training for existing Computer Studies teachers in Helambu
Group D – Training headteachers (IT literate) to use the school administration software package we've developed

Corin visited Melamchi Ghyang village and school in February 2017 for three months. The charity was able to complete the donation of five new laptops for the school, complete with MS Office and McAfee software loaded. Bhimlal Bhandari, aka BhimSir, is continuing to develop both student and staff computer skills.
During this visit Corin managed a three day Computer Training event in the April 2017.
Three Nepali teachers BhimSir, Nisan Rai and Ishwar K Bhattarai were signed up to deliver the training, laptops and two projectors are available, and detailed course content had been agreed.
In total 27 teachers from other schools across the Yolmo valley attended for 3 days and covered a wide range of topics.

Corin visited Melamchi Ghyang for four weeks in November 2016 to find out how the school and village were getting on after the earthquake.  Whilst there he began to make plans with the school for continuing IT and computer teacher training in 2017, agreeing curriculum content and sourcing skilled trainers in Nepal.  The charity was also able to support the provision of internet into the school.

Corin has returned from a five-week visit to Nepal in September - October 2015.  This time three friends from one of our partner charities Ketaketi joined him for the first two weeks, and the trip up to the village.  This was his first visit since the eartquake, so he was keen to find out how the villagers and school had coped and under what circumstances they were living.

We had already seen photos of the temporary classroom structures erected within five weeks of the earthquake and Corin was able to see ten classes running, with 220 students, the majority staying in temporary hostels at the school.  A temporary IT room has also been constructed.

Whilst Corin was impressed with the skills and ingenuity used by the villagers to re- create a livable village, the word he kept returning to was ‘temporary’ in all that he observed of community and school life.

Corin flew to Nepal on 12 January 2015 for his third visit.  During his four month stay he continued supporting the school at Melamchi Ghyang as they made good progress in integrating IT into school life - both in the classroom and in the administration of the school.
He was also be able to visit the other schools in the Hyolmo valley to encourage developments in IT: training teachers and supporting the development of IT teaching in those schools.
Corin was able to take with him a brand new laptop, with software, for use by the main IT teacher at Melamchi Ghyang school - thanks to the fundraising efforts of friends in the UK.

Corin Hardcastle first visited Melamchi Ghyang village and school for six months over winter-spring 2012-13. During that first visit he set up a computer teaching room in the school and begain to train students and teachers in computing and IT skills. He has since visited for three months in 2014 taking more laptops and to further develop the work which now focusses on training teachers and head teachers in the disctrict in using computers and IT in education.

Links with other charities

Melamchi Ghyang Secondary School is also supported by:Corin has worked with volunteers from these charities whilst in Nepal and is continuing to collaborate with the charities in response to the Nepal earthquake situation and also to continue conversations about future developments for the schools in the area.
Powered by